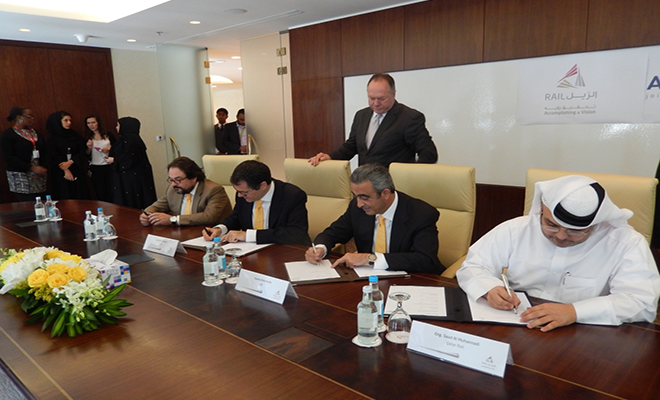 STFA, Turkey’s leading construction company with important and prestigious construction projects domestically and abroad, have won the “Gold Line” tender, the largest line within the Qatar Doha Metro, as part of a consortium of five, named ALYSJ.

The Gold Line tender, one of the investments being made in preparation for 2022 World Cup, is the biggest project in Qatar for this purpose with a cost of $4.4 billion.

With the signing ceremony held on April 23, 2014, STFA with its partners achieved the biggest tender ever won by Turkish contractors abroad.

Construction projects proceed without slowing down in the Gulf country Qatar, which will host the 2022 World Cup. Many companies from Turkey and around the world have put in for the projects in Qatar, which include Metros, underground stations, railroads, stadiums, shopping malls, hotels, highways, bridges, immersed tunnels and reservoirs. About 700 companies showed interest in one of the most important of these projects, the Doha Metro tender, and 70 joint ventures made up of 290 of these companies submitted competency files. The employer lowered the number of joint ventures first to 32, then to 18 and invited these joint ventures for the tenders. The $4.4 billion-worth Gold Line packet of the Doha Metro, made up of four main lines, was signed by STFA and its partners.

This project reinforces STFA’s presence in Qatar and the Middle East as well as the strategic positioning as the leading international constructor.

View All
We use cookies to ensure that we offer you the best experience on our website. If you continue to use this site, you agree to this.OKPrivacy policy